Tommy Taylor has spent the last twenty-seven months in the Peace Corps, helping those in need in Panama. And while he’s enjoyed his time there, it’s time to come home. His main goal once he’s back in the US? Have his first kiss. 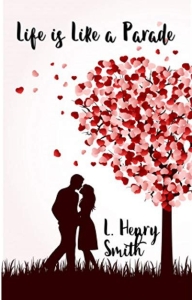 Life is like a Parade is a funny romantic novel from the perspective of the guy. I loved the new look on a typical romance story. L. Henry Smith does a wonderful job of creating characters that are funny, loveable, yet they’re two-dimensional. The writing fell a bit flat for me as some metaphors were over used.

When we’re introduced to Tommy, his only thought is of asking out a girl, Mandi, when he gets the chance. But we only really see Mandi once or twice throughout the entire novel. Instead, a woman named Jamie becomes the focus of Tommy’s endeavors. The book was short, a mere 170 pages, and reads very quickly. But towards the end, it felt as if Smith tried to tie up the loose-ends, almost as if he had a word count limit he needed to meet.

Paris. The future. Things have changed. Technology has advanced. Nature has receded. Except in Paris, where they have managed to integrate both nature and technology to create a haven for all.

In Jordan Phillips’ fiction novella, we explore Paris as it could be in the future. There middle class is now successful and known as Basics. You are not required to work. In fact, cooking has even become a hobby as AI units known as the Invisibles take care of pretty much everything humans may need.

In the midst of all this technology, Ruby yearns for a baby. But after a failed relationship, how is she to get what she wants? Sure, the Invisibles can help but she prefers a bit of nostalgia in this. As Ruby wrestles with being happy in her life and wanting a little one to love, we see her day-to-day interactions in this new Paris.

While I enjoyed Phillips’ story, I was left disappointed. I wanted more. I wanted to see more of Paris in the new era, more of how things had changed. I feel Phillips simply skimmed the surface of this world she has created. I hope she one day decides to flesh this story out so we can go deeper into Futura.