So my friend and I have been doing a “book club” for a few years now. I put that in quotations because it’s literally just the two of us and we really only read as we can rather than trying to be finished with a book at a specific time. But the past few books we’ve chosen have been….dreary to say the least. If you’ve been following along, we’ve recently read And The Mountains Echoed and The Book of Speculation. Now both of these books were beautifully written and the stories in them were amazing. But neither of them were what you would call “happy endings”. And well, with the state of the world, I’ve been looking for books with a more cheery disposition.

With that in mind, we chose to read Eleanor Oliphant is Completely Fine for our next book club read. 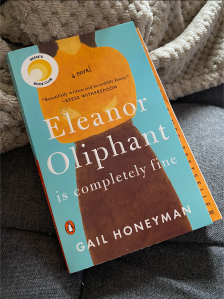 Eleanor Oliphant is trying her best. But with a horrible lack of appropriate social skills and a past that haunts her shadows, it’s not going well. Until she meets Raymond, average, unkempt Raymond. Suddenly her world is turned on its head and Eleanor sees all that her life could be. But she’ll have to face the voices of her past to move on with her life.

Touted as a romantic comedy, I was expecting humor and moments of sweetness. While I won’t deny that there were some very “awww” worthy moments, the humor was subtle. So subtle in fact that I don’t think I cracked a smile once during this whole book. Don’t get me wrong though! Eleanor Oliphant is Completely Fine is well worth the read. Telling a story of a woman shedding the darkness of her past and trying to find a way in the world is all this book is about. And it’s very well written! Gail Honeyman does a fantastic job of pulling at your heartstrings but lacks the skill of romance.

Eleanor Oliphant is definitely a book that will stick with you for the weeks to come. But please don’t go into it expecting a comedy of love and laughter. You will be sorely disappointed.